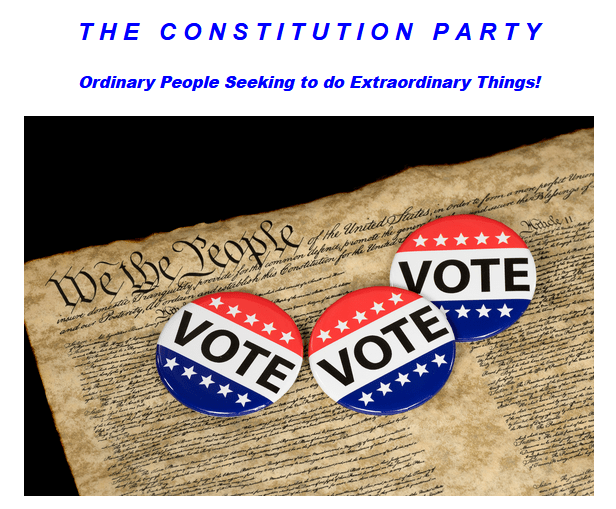 And The Candidates Are ….

A frequently asked question of the Constitution Party is: “who are your candidates?”

There are C.P. members who have been elected to local office throughout the nation and even more members who, by their citizen action, are creating the influencing effect of constitutional change in their communities. You may not hear about it, but victories are being won as we chip away at the 2-Party stranglehold.

Although our campaign budgets are small in comparison to other Parties, we are indeed; having an effect on local governments around the country

The Constitution Party needs YOU!

Dear Patriots, It is our hope that you will join us in this noble task of restoring our Republic. Liberty is not only a blessing; it is a responsibility and a sacred trust. It is not only our right; it is our duty to remain free.

If you are reading this; it is likely you are interested in a constitutional alternative to what our nation has been forced to accept for years!

The Constitution Party needs your skills, your love of God, family and country and your ideas and energy to promote LIBERTY. Think of it this way:  The Constitution Party is the structure and the framework for how things should be, but the people within it are the gasoline that makes the ‘engine for change’ to actually run.  The Party is only as good as the sum of the people who support us.

Please see the list below of 2022 CONSTITUTION PARTY CANDIDATES.

All of these candidates will be on the ballot in the November General Election and they need your help – both; physically and financially. The future of our children, grandchildren, and indeed the nation, depends on the commitment of concerned citizens like you, so consider lending your support by volunteering and making your most generous donation here: Join / Donate – Constitution Party

With your help, we can bring a message of freedom, hope, and victory.